I never did find anywhere to buy deodorant.  We were rushing everywhere!  Luckily, the subways and people we were around Friday smelled more like BO than me.  Although, I still was paranoid everywhere I went, because I thought it was me.  My husband reassured me it was not. 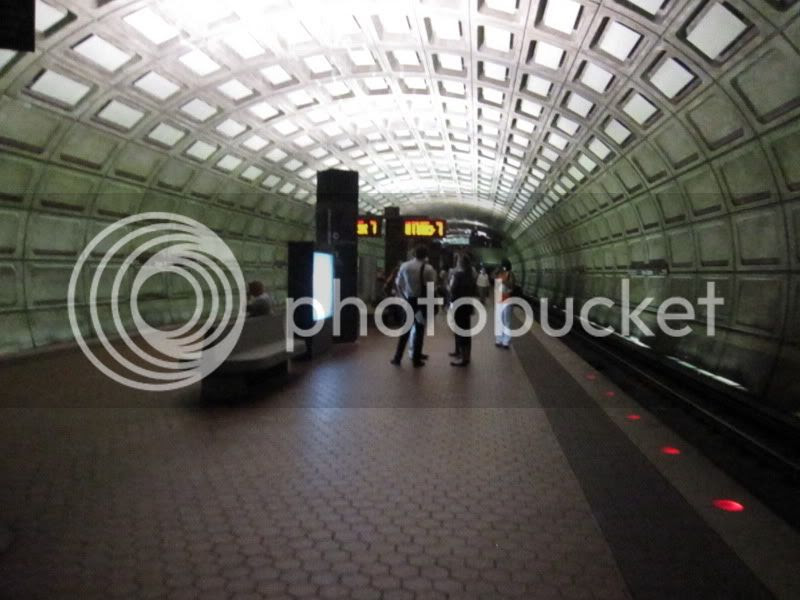 We got off the Amtrak at Union Station, but didn't get a chance to look around at all.  I hope we get some time to do it when we leave.  I need to take some pictures!  Getting on the subway with a huge suitcase was so difficult.  People take their sweet time getting off of it, so Dan was struggling to pull the thing on.  There were no warnings that I could hear, and the door slammed on the handle before we could get it through the door.  We were sitting there struggling trying to open the door and everyone was sitting there staring not attempting to help.  It was actually pretty funny looking back on it now. 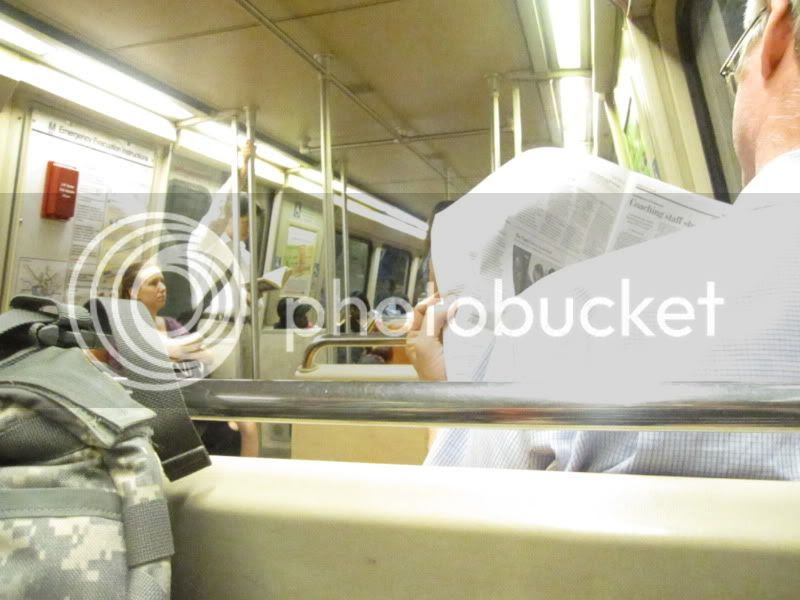 We finally go to Dan's cousin's house, they had a few beers, and then we went to get a quick bite before a play started that his cousin, Riley, had bought tickets for.  The play was called "Swampoodle."  It wasn't in a theatre or amphitheatre, but in an OLD building called the ULine where a lot of different things had gone on.  American Nazis had meetings there, hockey games were played, roller derby took place, and the Beatles played for America the first time.  During the performance, there were no chairs, so you had to walk around the building to see the different scenes.  That was really cool.  The only problem was, it was incredibly hot inside and I only had half a bottle of water.  So, I ended up having to go outside.  The writer came over to me outside, gave me a bottle of water and told me "we have a couple of seats reserved for people like you."  Haha, I was thinking, "people like me?  That's a way to put it, I guess."  I know she didn't mean it in a bad way, but it was just funny how she said it.  So, I got some fresh air and went back inside.  The play itself wasn't that great, because it didn't really have a plot, but it was worth it just to go to the building.

Next, we headed to a bar called The Pug that Riley frequented called The Pug.  On the way, I was actually called a "cracker."  I don't think I've ever been called that in my life, haha.  We get to the bar and its awesome!  They were playing a really good mix of punk, reggae, and soul ,and it killed me I couldn't get drunk and dance!  I miss it so much!  They had a few beers, while I had water, a hot dog and cheese puffs and then we headed back to Riley's house.
As you can tell, I didn't take a lot of pictures.  I should have.  I'm thinking this blog will actually help me do that!

It was a really awesome day.  I was having a little trouble with the walking, though.  I think I need to get a support band or something.  My muscles are not as strong as my last pregnancy and every step I took felt like someone had a hook pulling down my stomach.  Not comfortable.  My legs are cramping, too.  I hope it goes well.  I hate ruining everyone else's time by worrying about me!
Posted by Cheddah at 10:51 AM