My family and I get in a routine of eating the same thing every week.  Its mainly my fault, because its a lot easier going grocery shopping with the same list then searching for recipes and having to put new stuff on it.  We needed a quick meal tonight and I really wanted to do something different.  So, I searched through my Recipe folder in my email (I knew it would come in handy one day!) and found a Turkey Stromboli recipe from my Tight Bod with a Pod newsletter.

Its really easy to make, its cheap, and it tastes really good!  My daughter, who for the past couple of weeks will not eat anything, took a couple of bites and said it was "yummy."  She didn't eat much, but she did eat it!  Its low in calories, high in protein, and also supplies a kid's full does of vitamin A for the day.  Oh, and I used chicken instead of turkey, but I'm sure either would be awesome.  We had half of it left over, and I'm sure that they are going to make a good lunch tomorrow.  Italian foods are always good leftovers.


Here's a picture of how my turned out. 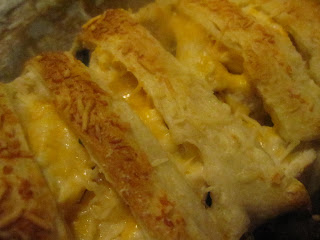 Not trying to be artistic or anything, the rest was ugly!  You can't see the chicken or spinach, but its in there!﻿
Now, I am not an expert at using wax paper, I actually don't even know if parchment paper and wax paper are the same thing, but my dough got stuck to the paper and I had to end up scraping off the bottom layer.  SO, make sure you use some kind of spray or something (maybe the right side of the paper?) so your's doesn't end up like mine!  But enough about all that, here's the recipe: 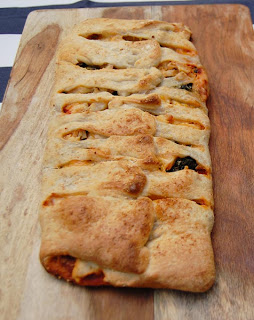 * Forgot to thaw the spinach? Microwave it on high for 2-minutes, then press out the water in a colander.

1.Heat oven to 400 degrees.
2.Boil a cup of water on medium in large skillet.
3.Add turkey and return to boiling. Cover and simmer 8-10 minutes. Allow to cool slightly, then chop.
4.Unroll crust into a 14″ x 12″ rectangle on a parchment paper-lined baking sheet.
5.Spoon half the sauce down the center, lengthwise, leaving 3″ on either side. Layer spinach, turkey, and cheese over sauce.
6.Cut 12 strips on both sides of crust. Fold strips over filling, so they overlap. Brush with milk and sprinkle with Parmesan.
7.Bake for 12 minutes. Serve with remaining sauce.